We use cookies to collect information about how you use the Scottish Police Authority website. We use this information to make the website work as well as possible and improve our services. 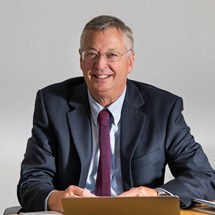 Sunday 20 November was UN World Children’s Day. A day to amplify children’s voices and advocate around issues that affect them now and into the future. A chance to focus what progress has been made improving their welfare.  The day also marks the anniversary of the date the UN General Assembly adopted both the Declaration and Convention on Human Rights in 1990. The Scottish Police Authority and Police Scotland are committed to a human rights-based approach to policing.

On 15 November, as Chair of the Scottish Police Authority, I hosted – along with Police Scotland’s Deputy Chief Constable, Malcolm Graham - a roundtable event with a wide range of civic and civil society partners to discuss how we can work together to reduce the number of children under 18 who are held in police custody cells as the only available place of safety. You can find out more here.

There was full agreement at the event on a single overriding message - holding our children in police custody cells is not an appropriate setting and not in the interest of the child. What is lacking is suitable and available alternatives.

While a welcome majority of under 18-year-olds agree or strongly agree they have confidence in police in their local area, this confidence drops off quite dramatically for the 19 -24 age group where it falls to 35% - which is even lower than the 37% for the whole population.

The evidence also shows that relatively few under 18-year-olds are in negative contact with Police Scotland. However, when those few are in in contact it is very often in traumatic circumstances and police processes can add to that trauma. James Docherty, from the Scottish Violence Reduction Unit, gave a graphic, evocative description of his own experiences with the police, and the role childhood trauma played in defining his relationships. 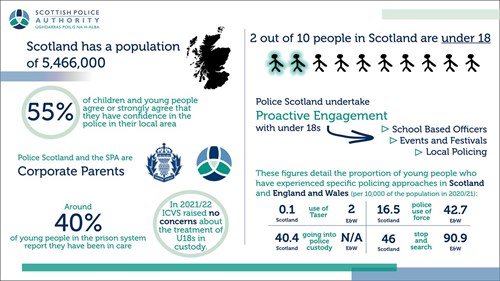 In recent years, there has been a significant reduction in the incidences where police have had to use force on a child in Scotland. The data also show far less regularity in the use of force than in English and Welsh police services. As an Authority, we welcome this reduction and are working to understand the reasons behind this and what else can be done to reduce it even further.

Unfortunately, we don’t have comparative data for children going into police custody in other jurisdictions across the UK which would enhance the overall picture. We are engaging with others across the UK to see what data they do have.

Availability of Places of Safety

Throughout the day, delegates focused on identifying how, by working in genuine and effective partnership, children who cannot be taken back to their home by a police officer could be taken to alternative and more appropriate places of safety than a police custody cell, while still allowing police officers and partner organisations to undertake their investigative and safeguarding duties.

Academic research is only one aspect of evidence that we need to gather and consider in this, as in other, areas of policing.

Evidence-based policing means that the best available evidence is used to inform and challenge policing policies, practices and decisions. It is clear to me that the professional experience, user experience, as well as advocate groups’ evidence and views, are the key drivers of improvement, innovation and change. We need more discussions and debate with insights from a broad spectrum of experience to consider challenging issues of children in contact with Police Scotland. Fiona Dyer of the Children and Young People’s Centre for Justice provided the legal framework we operate in, and thought-provoking outline of where the challenges and opportunities lie. 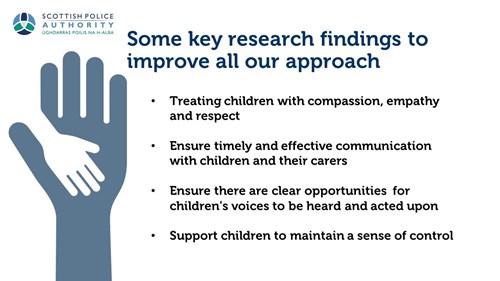 The discussion and conversation allowed us to spend time together and focus on the impact of children in police custody; acknowledge where our practices are good or poor, what we can all learn from each other, and crucially, what we can do to improve our current practices.

Human Rights are at the centre of policing values of fairness, integrity and respect, and events like this are how we seek assurance that policing in Scotland is always undertaken in the public interest.

The key challenge will be to take what was discussed at the event and use it to shape outcomes for children who find themselves in conflict with the law for whatever reasons. As we all agree that police custody – in its current form – is not the appropriate place of safety for children, it is our collective responsibility to advocate for suitable alternatives.

The Authority will work in partnership to ensure this collective endeavour maintains momentum, and that the progress made during this important event is translated into action. It is only through working together that we will effectively tackle this problem. The conversation has started, it is up to us all to turn those words into actions. 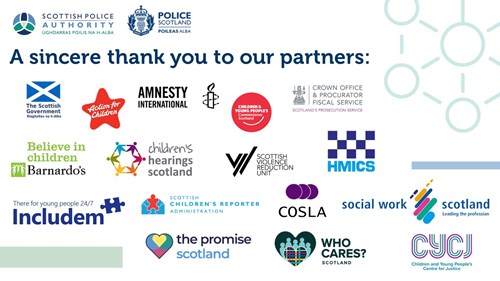